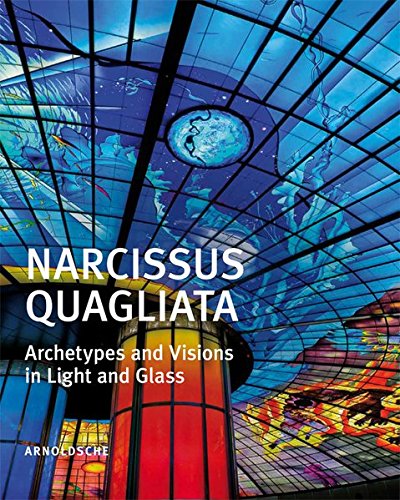 Born in 1942, Narcissus Quagliata studied painting and graphics in Rome and completed his studies at the Art Institute of San Francisco. Very early on, he discovered glass as the most suitable material with which to express himself artistically, focussing in particular on the phenomenon of light and its interplay with coloured glass. In cooperation with industry, Quagliata experimented at an early stage with the development of new forms and applications of glass. Today Narcissus Quagliata is considered one of the most significant glass artists, drawing worldwide attention through his spectacular works in public spaces, such as the Taiwan Dome of Light, the largest illuminated glass ceiling in the world, which forms the roof of the subway station in Kaohsiung, Taiwan. The construction stretches across an approximately 30-metre-wide space. His glass dome in the Santa Maria degli Angeli church, built by Michelangelo within the Baths of Diocletian in Rome, is equally well-known. It provides colourful illumination for the famous entry rotunda of the basilica.