Sons of Anarchy and Philosophy: Brains Before Bullets (The Blackwell Philosophy and Pop Culture Series) por From John Wiley & Sons 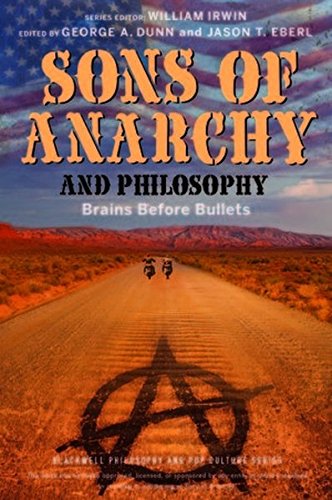 From John Wiley & Sons con Sons of Anarchy and Philosophy: Brains Before Bullets (The Blackwell Philosophy and Pop Culture Series)

Sons of Anarchy and Philosophy

From the Back Cover


Are we right to admire members of a criminal organization?

Are the Sons of Anarchy really anarchists?

How does their relationship to their bikes help to shape the Sons moral code?

Does membership in the MC tend to foster virtue or vice?

How do the club s practices and moral code make it like a religion?

FX s hit television series Sons of Anarchy draws viewers into the morally ambiguous world of a close–knit outlaw motorcycle club, where standard societal conventions and authority are shunned and replaced with a moral framework based on the bonds of brotherhood, family, and community and where members frequently war with other outlaw groups and the federal government to protect their interests and those of their home base, the town of Charming, California. Featuring essays by philosophical fans of the show and drawing on the ideas of some of history s greatest philosophers, including Plato, Aristotle, Machiavelli, Hobbes, Marx, and Nietzsche, Sons of Anarchy and Philosophy digs deep into the moral and political aspects of life in the MC the ethics of loyalty, honor, and revenge, individual and group identity, the morality of war and terrorism, political authority, and religion.

Essential reading for fans of the show, this book takes readers deeper into the Sons of Anarchy Motorcycle Club, the Teller–Morrow family, and the ethics that surround their lives and activities.


George A. Dunn is a lecturer at the University of Indianapolis and Ningbo Institute of Technology, Zhejiang University, China, and a writer on pop culture and philosophy. He is an editor of The Hunger Games and Philosophy (Wiley–Blackwell, 2012) and True Blood and Philosophy (Wiley–Blackwell, 2010) and has contributed chapters to many other books in the Blackwell Philosophy & Pop Culture series, including books on Terminator, Iron Man, Battlestar Galactica, and Mad Men.

Jason T. Eberl is Associate Professor of Philosophy at Indiana University–Purdue University Indianapolis. He is the editor of Battlestar Galactica and Philosophy (Wiley–Blackwell, 2008) and co–editor (with Kevin S. Decker) of Star Wars and Philosophy (2005) and Star Trek and Philosophy (2008). He has also written essays for similar volumes on Harry Potter, Metallica, Stanley Kubrick, The Hunger Games, Terminator, and Avatar.