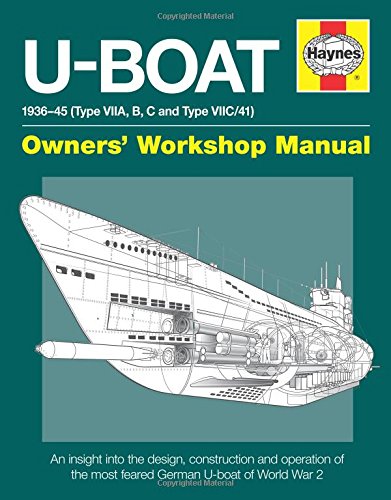 Texto en inglés. 28 x 21 Tapa dura de editorial ilustrada. Como nuevo. An insight into the design, construction and operation of the feared World War 2 German Type VIIC U-boat. The German Type VIIC U-boat, scourge of Allied shipping convoys during the Second World War, was the workhorse of the German U-boat force. With some 568 Type VIIs in use between 1940 and 1945 it was a potent fighting vessel that could hunt for long periods in the far reaches of the western and southern Atlantic. Centerpiece of the Haynes U-boat Owners' Workshop Manual is the sole surviving example of a Type VIIC U-boat, U-995, which is on display at the German Naval Memorial near Kiel in northern Germany. Submarinos. Literatura naval. Segunda Guerra mundial. Profusamente ilustrado.